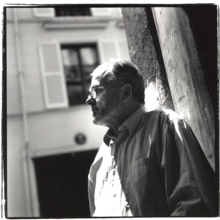 Born in 1940 in Talence, France, Jacques Lejeune studied music at the Schola Cantorum (Daniel Lesur), at the Conservatoire National Supérieur of Paris (Pierre Schaeffer) and the Groupe de Recherches Musicales (François Bayle). He entered the GRM in 1968 and was in charge of the ”music for images” section, where various productions for theatre and television were created. In 1978, he launched the ”Ateliers de musique électroaccoustique” as the result of a partnership between Ina-GRM and ADAC/Town of Paris. He created the curriculum and organised the running of the school.

In 2005, a bilingual double cd-book was published by Licences in the “Sonopsis” collection. In 2006, a second book containing visual and audio documents was released in the INA”s “Portraits Polychromes” series, published by Michel de Maule on the GRM”s internet site.

Most of his pieces evoke vocality in a kind of polyfigurism of images of reality and metaphorical figures of which he has proposed the following classification based on ordinary reality, the sacred, human and animal mythology and even critical satire :
• 1. The Character and daily landscape
• 2. The Fabulous :
2.a) Tales of the deep forest
2.b) The dream of the white water
2.c) Legends and magic of the air
• 3. Ritual and imagery of the Sacred :
3.a) Prayers and lamentos
3.b) Lovers, death and angels
• 4. Imaginary birds
• 5. Farces :
5.a) The Bestiary
5.b) Burlesques, gourmandise and erotism
• 6. Variations :
6.a) Studies and paraphrases
6.b) Pieces inspired by metamorphosis
6.c) Aphorisms

Since 2005 he has been working on this new and peculiar project on “interwoven languages”, is continuing his present work and also revisiting that of the past. He considers himself simply a composer who has developed this other way of diffusing his music on speakers acompanied by images and projected poems.
However, this new form (the musical fable) must not be only a mechanical video-musical product, decorative illustration of one genre by another. For him, it is always the music that leads the musical fable, all the while taking into account the reflections that spring from the use of the other “languages” that are woven into it. This interweaving of visual and aural games takes the imagination to a new complexity, towards a new act of modernity.
When a text that is recited or set to music is already present in the piece, the projected poem is then either superimposed (Berceuse pour un enfant de Palestine, Chansons de la main…) or distanced in terms of theme and form ( Le Cantique des Cantiques, Fragments gourmands, Chansons loufoques…) so as to open up more to theatrality or poetic meditation. It sometimes even takes on a contradictory (Messe aux oiseaux, Ave Maria…) or nonsensical role (Clin d”oeil à Jean de La Fontaine, Chansons zoomorphes…). Furthermore, where the texts are indissociable from the music, the pieces may be presented as live shows with actors and more elaborate stage settings (La Ronde des animaux…).
As for the notion of “fable”, there are two meanings : one as concrete material before it really becomes music, like the Greek fable representing mythological fiction out of which the theatre gradually grew ; the other, as the structure of both the signified and the signifier of the musical fable (music with or without text as well as poems and drawings relating to it).
Jacques Bonnaure speaks of Jacques Lejeune in these terms in La lettre du musicien of December 2000 : “Lejeune occupies a special place in the field of electro-acoustic music. He is perhaps the only one in this musical galaxy to speak, not without humour, the language of stories and dreams, of childhood and love, of gourmandise and erotism”. 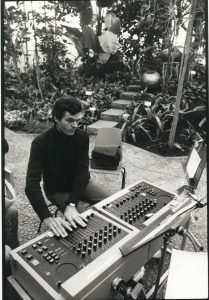 And Philippe Louvreaud adds, in Bibliothèque(s) of March 2006 : “…The music, both rough and moving, crude and tender, made of rustling, feverish agitation, clair-obscur buzzing, spreads out like an “electronic forest” where the material is manifested with no prejudice to its imaging virtualities… an exhaustive and detailed catalogue, English summaries, rich and original illustrations make this precious publication the greatest hommage possible to this still too secret figure of today”s music…”